The CU-A23 Brionac (ブリューナクBuryūnaku) is a warship from Ginga Force.

It is a battleship utilized by both Viridian Taylor and the Rapid Deployment Force.

It is the 9th boss and 9th stage itself due to its gigantic size. This is Viridian's personal ship and is equipped with self-repairing cannons, missile launchers and is capable of launching several small ships against the Enforcer.

After being destroyed, it will try to destroy the Enforcer with an energy blast from its main cannon, but it fails and ends up launching an Experimental Ship piloted by Viridian, leading to the 10th stage and final boss fight of the game.

During the 9th stage of the game, around 3 Brionacs can be seen stationed on the background inside the RDF Orbital Station.

Although they're not seen in action, their weaponry seems to be identical to the one used by Viridian, and the RDF "Variant" has blue details instead of red.

Zoom-out view of the Brionac before its Laser attack. 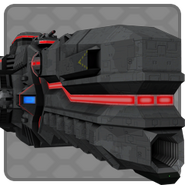 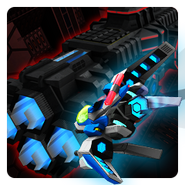 Brionac and the Enforcer in the "Order of Destruction" Trophy

An RDF Brionac (Bottom left) seen in the 9th stage of Natsuki Chronicles.
Community content is available under CC-BY-SA unless otherwise noted.
Advertisement