The FG-G21 Garm (ガルム Garumu) is a Heavy Vehicle from Ginga Force and Natsuki Chronicles.

It is used by Mitsurugi Security Service and the Rapid Deployment Force as a special vehicle to capture both criminal and military ships.

While Garms are mass produced, pilots require training, obtain the "Heavy Vehicle License" and later permission from the RDF to operate them when the situation requires its use.

Like the Enforcer, Garm is considered a defense vehicle for the MSS.

"Just what you'd expect from a Golem... they're capture ships that are often used for military purposes, too."

In Ginga Force, the player engages a Garm piloted by Natsuki Sugiura at the end of Stage 7. Like the other bosses of the game, the player can decide if he/she wants to destroy it part by part or attack the main weakpoint of the vehicle. Like the rest of the previous bosses, the defeated Garm falls off the space elevator wall to its apparent destruction.

In the Rising Star Games' release of the game, the vehicle is called "Golem" which in katakana is "ゴーレム" (Gōremu).

In Natsuki Chronicles, the player takes control of Natsuki's Garm. This time, the vehicle cannot be destroyed by parts and uses 10 additional Extra Shields on its initial configuration, bonus 15 Ex. Shields can be added as the player levels up on the Stage Study Level. After the battle on the space elevator, it is revealed that Specia took control of the Garm when Natsuki lost her consciousness, making an emergency landing on the base of the space elevator, which worked as a perfect hideout.

Like in the localization of Ginga Force, the Rising Star Games version of Natsuki Chronicles also calls it "Golem".

Garm as the Stage 7 boss of Ginga Force.

Garm fighting the Enforcer in the "Everything Starts Here" achievement illustration

Margaret and Natsuki's Garms in Memory 3 (XBOX One version).

Memory 3 (PlayStation 4 version), where the vehicle is called "Golem"

Garm fighting the Enforcer during the "Turning Point" cutscene

Garm after the battle with the Enforcer. 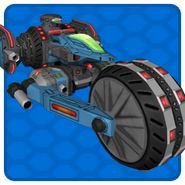 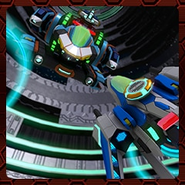 Garm VS Enforcer in the "It All Starts Here" trophy of the PlayStation 4 port of Natsuki Chronicles. 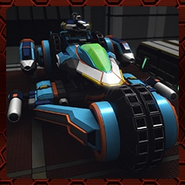 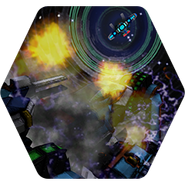