Ginga Force (ギンガフォース Ginga Fōsu) is a vertical scrolling shoot'em up game developed by Qute Corporation and released in the XBOX 360 console in February 14th 2013 as a Japan exclusive release.

The game was later released for the PlayStation 4 and PC by Rising Star Games in 2020.

The game is set in the distant future, where mankind had successfully expanded to the far reaches of the solar system. Six planets have been previously explored and now people have migrated there. Beyond the sixth planet lies a seventh Earth-like planet called Seven Tier. Seven Tier was considered a suitable planet for humans to live, and the planet also had a large amount of energy called "Septonium". The energy company known as the "Magnificence Energy Corporation", or Magni Corp., turned its eyes toward the Septonium and were soon successful in terraforming the planet. Thus, people had begun to immigrate to the planet. Soon after, a law enforcement agency called the "Mitsurugi Security Service", or MSS, was formed for the sole purpose of protecting Seven Tier and its people. The main protagonists are Alex Heatburn and his partner Margaret Whitetail, pilots of the MSS Central City branch, flying their fighter the FV-G27 Enforcer under the callsign "Hound 1".

The company Rising Star Games announced the localization of Ginga Force and Natsuki Chronicles for the PlayStation 4 and the PC via Steam, with a release date of August 28, but it was suddenly changed to simply 2020.

Since the announcement there wasn't any news about it, making gamers to think this sudden change was due to the ongoing COVID-19 pandemic. On September 15th, Rising Star Games confirmed Ginga Force will be released on September 24th for the rest of the world.

The game is currently available as a digital download.

In Japan, the game was released in July 3rd. According to shmups forum member iplaymyshmups, the japanese PS4 release has english text when is played in a non-Japanese PlayStation Network account.

In January 14th 2021, First Press Games announced the "Regular" and "Collector's Edition" releases for both Ginga Force and Natsuki Chronicles and a Special Bundle with both games included. They're scheduled for the second quarter of the year.

With Microsoft's announcement of the XBOX Series X's Backwards Compatibility with all of XBOX, XBOX 360 and XBOX One's games, it implies that Ginga Force (along with the rest of Qute's games) will be fully compatible with the upcoming XBOX Series X console.

Sony's announcement of the PlayStation 5's backwards compability would initially range from PS1 to PS4 VR, making highly possible that both Ginga Force and Natsuki Chronicles also became compatible with the upcoming PS5. Unfortunately, it was revealed that the PS5 can only run PS4/PS4 Pro on its "Legacy Mode", despite this limitation there is still hope that both games would be compatible on the PS5's Legacy Mode since the console will be compatible with the majority of the PS4 catalogue.

On May 30, 2018, the XBOX360 emulator Xenia was able to emulate Ginga Force. According to user Sakimotor, the game is playable but still has some issues.

Title screen for the PS4 release.

English logo for the PlayStation 4 and PC ports by Rising Star Games.

Startup screen for the PS4 port. 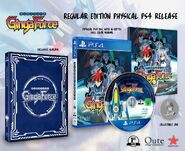