Natsuki Chronicles (ナツキクロニクル Natsuki Kuronikuru) is a shoot'em up game developed by Qute Corporation in 2015 and finally released on December 25th, 2019 on the XBOX One after a 4-year delay on its development.

The game takes place 3 years before the boss battle with Natsuki Sugiura and the Garm in Ginga Force. Starting from Natsuki's first mission with the RDF as the new rookie in the team up to the confrontation with Alex and Margaret, now seen from Natsuki's point of view. After her defeat, she realizes the truth of Magni Corp., the MSS and the RDF and makes a decision of going against them in order to save Seven Tier.

The company Rising Star Games announced the localization of Ginga Force and Natsuki Chronicles for the PlayStation 4 and the PC via Steam with August 28th as their release dates, both were changed to simply 2020, probably due to the COVID-19 pandemic.

While Ginga Force was released in July 3rd in Japan and September 24th worldwide, the release date for Natsuki Chronicles wasn't mentioned except for a "Fall 2020" release. However, the game wasn't released on 2020, making a 2021 release more plausible.

In January 14th 2021, First Press Games announced the "Regular" and "Collector's Edition" releases for both Ginga Force and Natsuki Chronicles and a Special Bundle with both games included. They're scheduled for the second quarter of the year.

Also, with Sony's confirmation of the PlayStation 5's compatibility with PS4 games, both Natsuki Chronicles and Ginga Force are playable on PS5.

On February 17th, Sony announced on the PlayStation Blog that Natsuki Chronicles is playable on PS4 and PS5.

Teaser logo for Natsuki Chronicle and a wireframe to CG render of the Dominator. Notice the use of the Enforcer silhouette in the right.

Final version of the logo, notice the title was pluralized as "Chronicles" and the silhouette of the Dominator replacing the Enforcer.

Original Japanese logo of Natsuki Chronicles currently used on the XBOX One.

English logo for the PlayStation 4 and PC ports of Natsuki Chronicles by Rising Star Games. 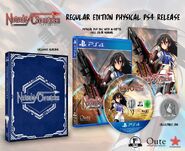